The Power of Staring into an Active Volcano Hiking Mount Bromo

If you ever want to gain some perspective on your life and the things that are important, stand on the rim of an active volcano and stare into the core of the crater. The power of these things can be felt by almost all your senses. The smell of the sulfur, the sight of the billowing smoke, the sound so deep it vibrates your insides. Whatever thoughts might have preoccupied your mind as you climbed to the top fall to the wayside, as they seem so unimportant in-comparison. Knowing that if this volcano chose to it could wipe out absolutely everything around it and there’s nothing you could do to stop it. On the one hand this is a terrifying realization, that despite all our advancements as a civilization, we are still defenseless to the powerful will of nature. On the other hand there’s also something beautiful and almost comforting in this same idea. A reminder that no matter how bad things might appear to be, they are minuscule in comparison to being underneath the eruption of a volcano.

For the people of Indonesia, disasters and volcanoes are one in the same. The history of these islands is riddled with tales of volcanic eruptions that completely altered the lives of the people living in the area. If you chat with a local from almost any of the major islands, they will have a story about how a volcano effected their island.

I’ve climbed many volcanoes before in various regions of the world, but nothing compared to the feeling I took away from hiking Mt. Bromo. From a physical standpoint, this adventure couldn’t even be called a hike. It was a walk across some sand dunes then up some stairs to the rim of the volcano. This volcano is in a very remote part of Java island and it’s really tough to get to and climb independently. It’s one of, if not the most famous volcano in all of Indonesia, which means big tourist dollars, so tours have been setup to take people there so locals can profit off the volcano. 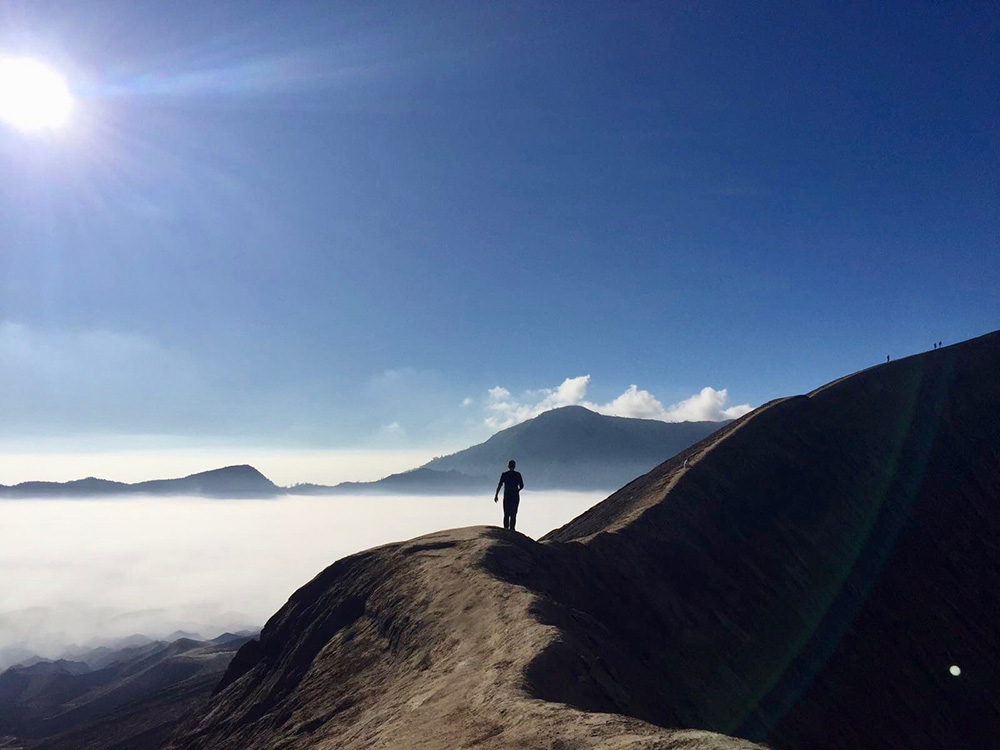 We booked a tour through a guesthouse in Yogyakarta, a nice little city in the south of Java island. The tour was 3 nights and two days hiking both Mount Bromo and and Mount Ijen volcanoes. To be honest we knew very little about what the tour really included, we just spur of the moment last minute signed up for one from our guesthouse as it seemed like the most popular and easiest way to cross the rest of Java while seeing two legendary volcanoes.

It all started with a 3:45am alarm going off in one of the most disgusting hotel rooms I’ve ever stayed in. If you find yourself partaking in a Mount Bromo tour and you have a choice of hotels to pick from, avoid the Sion View Hotel like the plague. We’d heard it wasn’t very nice and asked to stay elsewhere, but what’s advertised on trips and what actually happens are vastly different in Indonesia. This is the type of hotel room you see in movies where junkies live. There was mold all over the ceiling, sheets weren’t clean, and the bathroom was in a state that you would feel dirtier if you took a shower than if you didn’t. My girlfriend was not too pleased with what I’d gotten us into…

After a few hours laying in all our clothes on top of the bed so we didn’t have to touch the sheets, we got up and a jeep took us to a peak nearby Mount Bromo to watch the sunrise behind the volcano. The funny part about the whole thing is that while it felt like an adventure traveling in the back of a little jeep up a mountain in Indonesia, there were hundreds of people on the same adventure with a line of jeeps all cruising up to the same viewpoint. We arrived a bit earlier than the herds so we managed to get a nice spot, bought some coffees off a local street vendor, and felt real cold for the first time since we’d been in Southeast Asia. 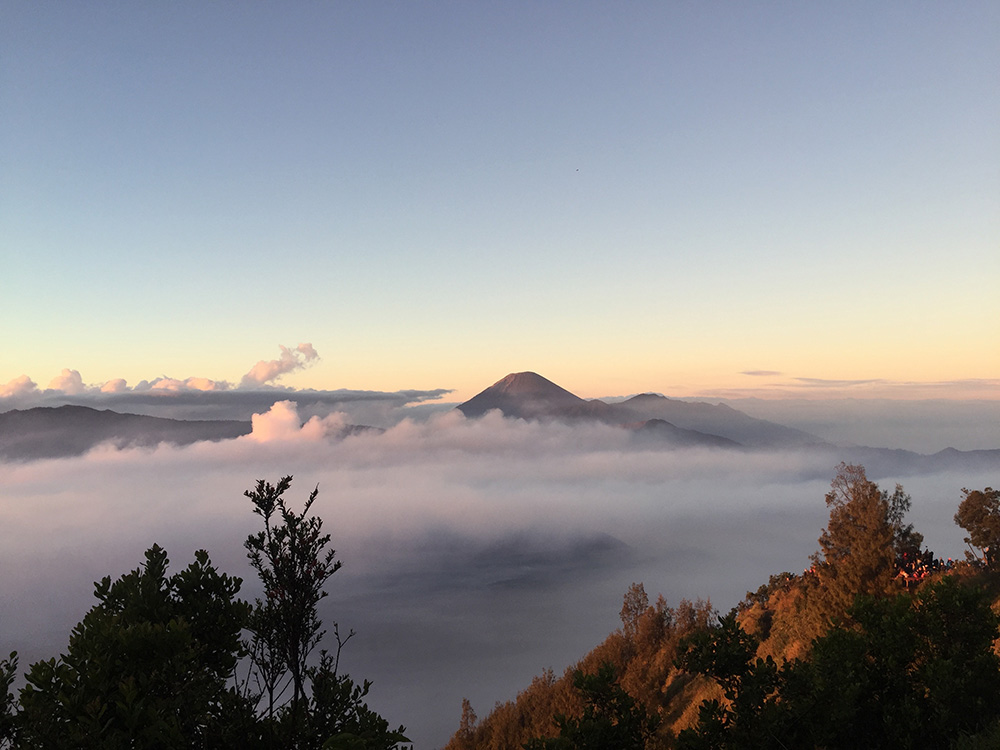 After a gorgeous sunrise, we headed back to the jeep and cruised over to see the volcano up close. The area below the mighty Mount Bromo is known as the sea of sand, which was an alien looking landscape that had clearly been completely destroyed by lava on multiple occasions. In the morning twilight with a gentle breeze stirring up the sea of sand and obscuring the view of horses, motorbikes, groups of people, and temples, it was a truly surreal landscape. As we were ahead of most groups we had a clear path through the sea of sand and up the stairs that have been built right up to the crater of the volcano. 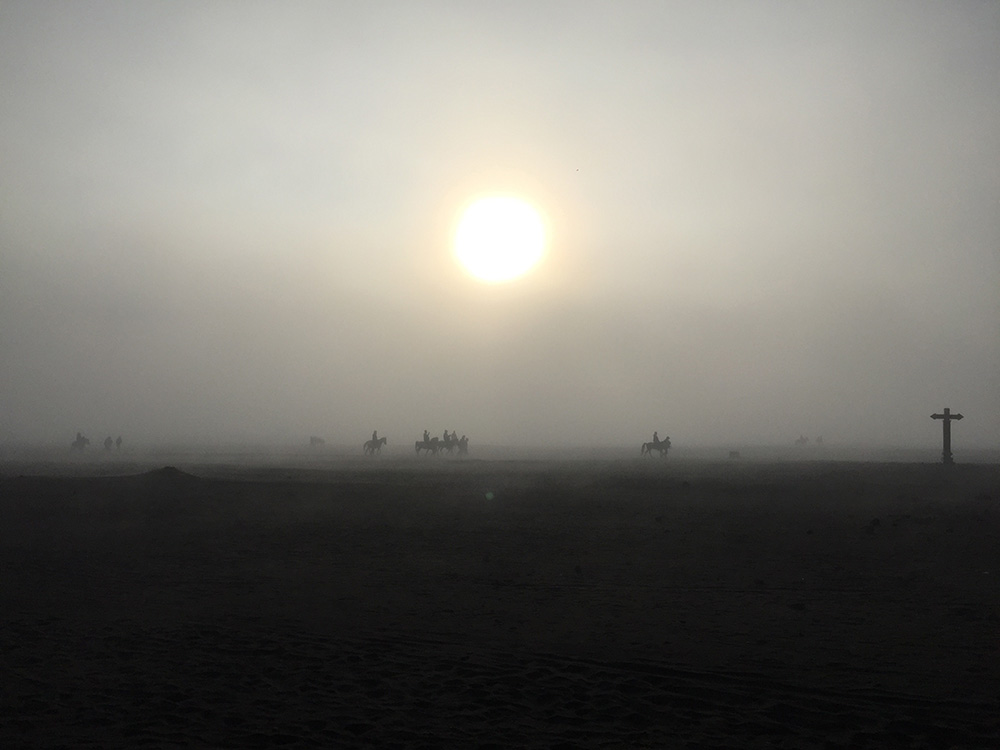 As you approach the volcano you can start to feel it. It’s much more than just a rumbling sound, the frequency of it really stirs something deep inside you and you can feel a physical sensation inside your body. As I made my way to the top and finally got a view inside, I was absolutely awe-struck by it all. There was a small crowd near the top, so I made my way around the rim to a more isolated vantage point to just stare at this almighty phenomenon displayed before my eyes. The ridge had very little margin for error and my girlfriend had some feelings of vertigo standing on it, so I made my way around to the highest point by myself. With an endless blue sky, volcanoes dotting the horizon and a rumbling beast beneath my feet, this was one of those moments that makes the pains of traveling more than worth it. 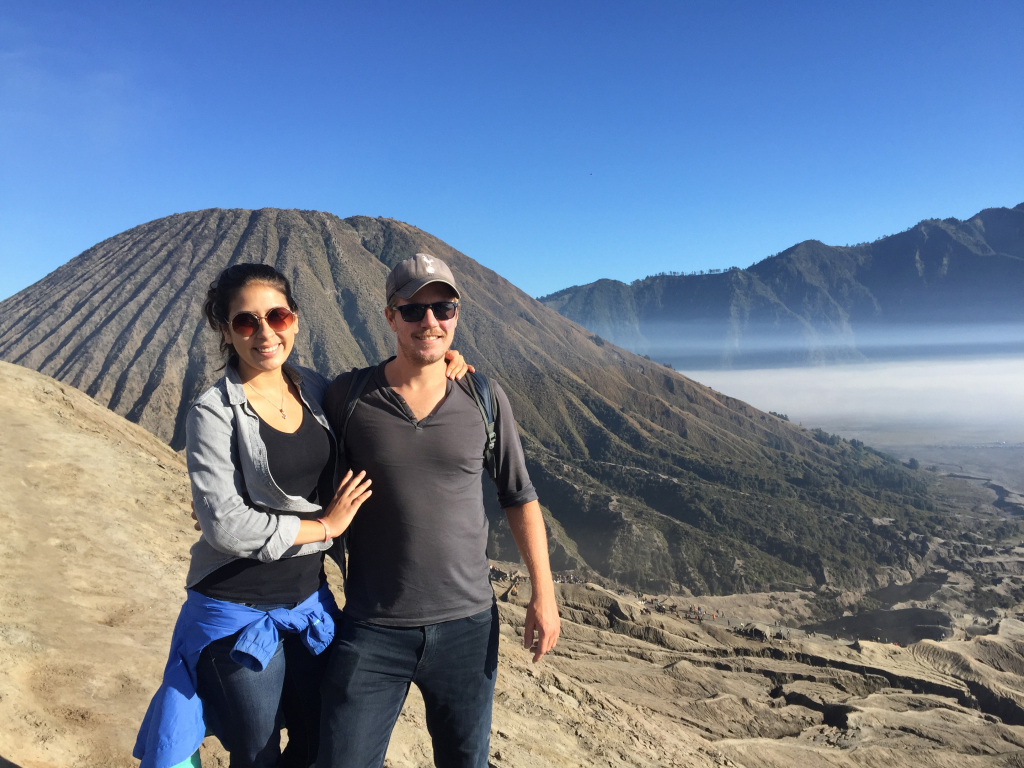